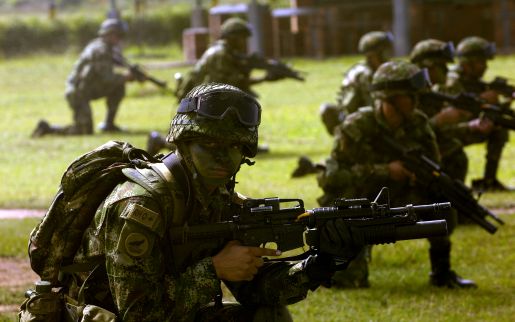 Colombian special forces and intelligence officials pulled off a polished, technically sound, albeit risky rescue mission this past week. Needless to say, the payoff was nothing short of monumental. The operational ruse yielded a swath of the FARC’s most politically significant captives, including three American defense contractors and French-Colombian politician Ingrid Betancourt. Unless one was trekking the Amazon in search of the “lost tribe,” the aftermath played out center stage internationally— a sweeping political victory for President Álvaro Uribe.

For those who follow the Colombian counterinsurgency it should come as no great surprise that U.S. officials have played a deft but discreet role toward this poignant moment, perhaps the crushing blow to a once-formidable FARC. Officials of both countries have made it abundantly clear that Colombian forces planned, commanded, and executed this operation in full force. But, as Juan Forero of The Washington Post outlines in his piece this Wednesday, American assistance was pivotal in its combat support role. Actionable intelligence was exchanged, government consent provided, and U.S. Special Forces operators accompanied reconnaissance units they had been for years training in tracking the hostages’ positions along the Apaporis River of southern Colombia.

The professionalism and ingenuity of the Colombian armed forces and cadre of intelligence officers has truly been showcased this year. With remarkable breakthroughs in its long-winded counterinsurgency, it has now managed to ravage the ranks of the FARC secretariat, largely untouched for 40 plus years.

Riding the congratulatory wave, many officials here in Washington are eager to tout Plan Colombia as a beacon of American foreign aid, its largest package delivered outside of the Middle East. Highlighting the success of such initiatives, Senior Policy Analyst Ray Walser of the Heritage Foundation, asserts:

“The rescue is a powerful indicator that U.S. assistance and support for Colombia’s military through Plan Colombia continues to yield results in the campaign against the narco-terrorists of the FARC, stripping away their leaders and military cohesion, and now their ability to manipulate the headlines through exploitation of the plight of captives.” […]

“As [U.S.] Congress moves to debate continued funding for Plan Colombia, it should consider the rescue of Ms. Betancourt, Mr. Gonsalves, Mr. Howe, and Mr. Stansill as a demonstration of the effectiveness of Colombia’s military forces. Well-trained, professional and under civilian guidance, Colombia’s military is willing to partner with the U.S. to curb the depredations of kidnappers and narco-terrorists. “

While the bolstered state of the Colombian military indeed marks a solid affirmation and can be in part attributed to American assitance, Adam Isacson, an expert on Colombian affairs from the Center for International Policy, points out the following (see link for statistics):

“According to this exercise, we estimate that about 35 percent of U.S. military aid in 2007 went to non-drug missions. The remaining aid – nearly two-thirds – has gone to the drug war, which – as is now general knowledge – has not affected the amount of coca grown, or cocaine produced, in Colombia and the Andes.” (emphasis original to author)

Here marks the fine line Plan Colombia has teetered upon since its induction by President Clinton and Pastrana in 2000. In large part, the comprehensive package had been cloaked as a counternarcotics initiative, partitioning the contribution of U.S. resources from that of domestic counterinsurgency operations. In this respect it has failed rather miserably. While many would argue over the years the two campaigns are indistinguishable, political considerations drove this agenda amid frustrations of field-grade American and Colombian officials. As such, until recently, American policy in Colombia defined Washington’s initiative toward the fabled War on Drugs.

Post 9/11, with a more expansive mandate to the War on Terror, the Bush administration among other central actors blurred the lines of American engagement, now labeling the FARC a narcoterrorist faction undermining the democratic institutions of America’s regional ally. Arguably this made rarely few changes on the tactical level, but new strategies and support for measures of cooperation were forged as a result.

President Uribe’s strategic footprint of Democratic Security has produced respectable outcomes even his most avid detractors cannot deny. Urban security is at all time highs, murder and kidnapping rates have fallen dramatically, and the economy is growing at a steady rate. Attributable in part to Plan Colombia? Here I see shades of truth.

That being said, it is a dangerous proposition to attribute these institutional conditions and the recent string of military blows to the virtues of Plan Colombia. The raw fact is that coca produce is at staggering levels across Colombian territories in terms of hectares recorded by the UN for 2007. Exports are at all time highs, with cartels and quasi-political syndicates marching cocaine to western Africa onward to Europe and to Mexico en route to the U.S. markets. Illicit players are still garnering unseemly profits that will only serve to undercut the notion of future state security.

Sound a bit detracting and fatalistic? Well, one only needs to revisit the counterinsurgency campaigns leveled to thwart Pablo Escobar’s Medellin cartel and later that of Cali. American and Colombian officials alike saw the downfall of Escobar as the end all for vast waves of violence that had plagued the state for an era. In fact, author Mark Bowden cites a number of officials from the U.S. Drug Enforcement Agency (DEA) in his work, Killing Pablo, that express their given believe at the time that the U.S. War on Drugs had been won with his fall from grace, and the Colombian state had regained legitimacy.

The American hand in the counter-cartel campaigns was arguably more direct than is now given under the formal Plan Colombia. It is widely speculated that Colombian Search Block and U.S. Delta team operators collaborated directly or inexplicitly with the Castaño brothers and Los Pepes to bring down the Medellín cartel’s hierarchy. Likewise, CIA surveillance flights aided Colombian police in triangulating intercepted communications from Cartel members. In Carlos Castaño’s biographical account, he admits collusion with Colombian officials to knock off members of this Escobar’s inner circle.

While the rules of counterinsurgency are often inextricably Machiavellian and draw strange bedfellows, in the context of the contemporary parapoltical scandal, it is evident enough that eliminating one public enemy can give rise to the next. Nowhere is this as financially practical than in Colombia, given its illicit profits from narcotics.

Colombia is an amazingly resilient state that has managed to reach new heights today under President Uribe. In line, American aid and training has surely attributed to the successful counterinsurgency campaign. Though, it would be far too simplistic to believe that Plan Colombia has indeed achieved its intended objective.

Yep, the state is all the better with a disminishing FARC, but with their hold on the narcotics cultivation slipping, one begs to ask, who picks up the slack and has anything really changed for the long term? To whom will pass the lucrative drug trade still clearly prevalent in the Colombian state?

With the Merida Initiative rolling out of Congress this summer based on much the same blueprint, it is only rational to reflect upon both the relative successes and the pitfalls of Plan Colombia itself.