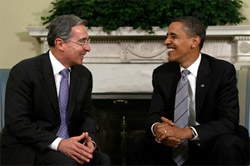 Much has been made of a rift developing between Colombia’s Uribe administration and its US counterpart in the new Obama team. After all, the interstate free trade agreement (TLC) debuted on the Washington scene more or less dead-on-arrival, Plan Colombia funds face increased scrutiny and measures to reallocate distribution, and Colombia’s human rights reputation in the global sphere suffers in the shadows of organized extrajudicial killings. Don’t forget the background buzz of an audacious third presidential mandate for Uribe on the horizon. At face value, just a little bleak.

In truth, this distancing on some level was inevitable when one considers the synergy the Uribe and Bush administrations carried across his two terms. This in itself is not a gamebreaker, as the United States and Colombia entertain a longstanding partnership on multiple fronts. However, considering Bush’s wildly unpopular image across the Americas, preferential treatment at this point by the Obama team signals no shift in US diplomatic intentions, nor does its amplify the message of a new era previewed by Obama at this year’s Summit of the Americas. Diplomacy of now calls for a timeout on the dramatic award swapping and public displays of affection.

That being said, I see no tangible evidence of weakening in the US – Colombian strategic relationship. Its orientation will shift toward a more pan-regional approach, in security, energy and economic initiatives, but both countries have vested interests in maintaining strong ties and promoting this broader agenda.

Several realities back this notion. First, while Uribe and Obama were ‘walking the dog‘ in front of the press corp this week at the White House, jousting on the above mentioned tensions, Cambio magazine published an exclusive yesterday, citing a near finalized process to amplify US SOUTHCOM’s presence across five proposed bases in Colombia. Last April I outlined the initial whispers of DOD moving shop to its Andean neighbor after getting the boot from the Manta forward operating location in Ecuador. But, the scope of this proposed ten year lease would mark a shift in US defense and counternarcotics operations in scale, projection and orientation in the region.

While Colombian defense minister Freddy Padilla has made it clear that negotiations are indeed underway, he and others in the Uribe administration have made strident efforts to emphasize the more integrated nature of this agreement. In essence, the US presence would be on a shorter leash, operating in the context of collaborative guests, privy to limitations on immunity ordained to US personnel, military and civilian, that carry out mission objectives in Colombian territory.

Predictably, this remains a sensitive issue for US officials. It strongly objects to the trying of US citizens involved in state business under international jurisdiction. The advantages to this agreement however, would further force projection and narcotics interdiction efforts to include the Caribbean and Pacific sectors, and through the well equipped operations base, Palanquero, in central Colombia. Colombia would too benefit on some level from bolstered surveillance and counterinsurgency capabilities provided by US military aid.

Still to be determined is the legality of such an agreement under Colombian law. Critics question whether the nature of foreign force augmentation would require permission from its congress and/or supreme court. In any case, this move spells anything but toeing away from US security commitment to its Andean counterpart.

A second reality appears a bit more dubious for now, but nonetheless will come to pass. I’m fairly confident that the Obama administration would have no qualms in pushing the Colombian Free Trade Agreement out the door under a subdued political climate. Yet, much as during the election season, this move under our economic dry spell would equate to swift political suicide. Now it would not only do battle with labor unions, but the American taxpayer would also cry ‘job exodus’.

In reality, as many have pointed out, much of these free trade stipulations already exist and are actively utilized by multinationals– just in temporary form. The benefit of actually solidifying them would draw greater potential for foreign investment under the premise of economic security to Colombian industry. Between intermittent nationalization and waves in free trade initiatives, many international firms will simply not invest in Latin American infrastructure if there are marginal doubts of its sustainability in hard times. Bottom line, yes, labor conditions and security are issues, but not the principal factor halting the agreement.

Beyond these two dynamics stand many more complexities — but regardless of who draws numbers in the upcoming 2010 Colombian presidential election, they’ll likely recognize this alliance has, in reality, drifted little, even if now a bit more behind closed doors.