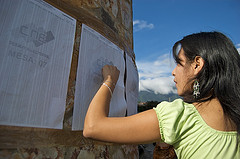 No tanks grind along the washed-out streets of Caracas, nor have battalions stormed breakaway sectors of Venezuela this Monday. No revolutions were to be televised. Rest assured Ms. O’Grady, the Andean state lives to see another day.

Record numbers of Venezuelans hit the streets yesterday, enduring long lines to partake in the country’s regional and municipal elections.

After months of lofty expectations for a political showdown between Chavistas and opposition to the current regime, results dictated in the early hours this morning permit neither side to boast of fervent victory.

Charged for many months by an aura of executive scale, the vote would gauge popular sentiment for President Hugo Chávez’s Bolivarian mandate and the fate of candidates who positioned themselves to such. Given his widespread grip upon the allied majority of Venezuela’s 22 states, it would test support for his ‘por ahora‘ stance, an onward pursuit toward expanding his grandiose socialist agenda.

Upon the announced results from the national election board (CNE), Chávez publicly declared:

We have a map almost completely dressed in of red, just a bit of red […] It’s a great victory for our people, for the PSUV (United Socialist Party of Venezuela). The road toward the construction of socialism has ratified itself– the new historic project of Venezuela; and now, we will move to deepen and extend it.

Although pro-Chávez candidates claimed victory in major swaths of the country, the most populous sectors with significant political sway, including the greater mayor of the nation’s capital Caracas, ceded to opposition. These decisive blows included wins in oil-heavy Zulia, north central Miranda, Tachira, and the industrial powerhouse, Carabobo. It appears grassroot frustrations with public security, inflation, high cost of food commodities, and lack of alternative chopped a leg from under the president on his country’s throne.

Chávez, however, contines to hold solid river cards at the governing table, brandishing broad insitutional control and consolidating party loyalists at nearly every level. Yet, his absolute goal of rehashing the failed 2007 constitutional referendum (allowing among other items, unlimited reelection) continues to sink, further washed over by the political riptide of yesterday’s ballot draw.

Venezuela is not a particularly popular topic in Washington these days. To most, the bombastic rhetoric that President Hugo Chávez throws to the airwaves on an almost weekly basis has instilled an innate ‘mute’ response from those in the American foreign policy sector. Indeed, at times the elaborate feuds of the Venezuelan regime play out more as a flailing telenovela than international diplomacy.

Behind the scenes however, political rip tides are stirring Caracas in the midst of upcoming federal and municipal elections at the year’s end. On such accord, a rising young politician, Mayor Leopoldo López of Chacao, made it a point to visit the United States this past week to convey a sense of both the elections’ significance and shine light on its already fraudulent bearing.

Featured in Monday’s Washington Post op-ed , López is among hundreds of opposition candidates that have been blacklisted by the government well before the ballots are to be cast by the greater public. Jack Diehl of the Times explains:

“Two weeks ago, Venezuela’s national electoral council, dominated by Chávez followers, moved to ban López and 371 other candidates from the Novemeber state and local elections, which are shaping up as the most important since Chávez was first elected nine years ago. This broad exclusion was based entirely on the finding of another Chávez appointee, who ruled that each of the candidates was guilty of an administrative or legal offense, though none has been judged in court.”

To this end, López spoke before a forum organized by the Inter-American Dialogue, in which he outlined the progress made in the Cachao municipality of Caracas, the growing necessities of the Venezuelan populace, and the fallacies contrived by the regime to undermine ‘alternative’ governance (Audio here).

According to López, the current regime holds a grip on a near 90 percent of the political system, making it difficult to maneuver on strategic and tactical levels before the monopoly. He himself has been a victim of three assassination attempts and a kidnapping in 2006, both events he attributes with certainty to the government for his discrepancies in policy.

In step with this rhetoric, López attributed the following paraphrase to Chávez himself earlier this year:

“We are confronting a possible war if we lose the regional elections in November […] If we lose regions like Caracas, like Miranda, like Táchira, we will be in a state of war.”

Framing this motive, López cites clear breach of the Venezuelan Constitution in Articles 65, 42, and 289, which declare a citizen eligible to run unless convicted by a judicial body of a criminal offense, and in the latter article describes the limited role of the board itself to exercise nullifying powers. In an ironic twist, Chávez had been brought before the Supreme Court on such criminal charges after his manufactured coup in 1992. Even so, the decision had not been one strong enough to dispel him from the ballot box in 1998.

Despite the hostilities and a regime hell-bent to derail any potentially successful candidate, the mayor maintains that these elections must be seen in context of the 2007 mandate that aimed to indefinitely renew his executive role. It marked Chávez’s first rebuff since his election in 1998. From there, he argues a fundamental campaign for change must be fortified by a few pillars:

And if López and other ‘alternative’ candidates were able to show some success at the polls in November?

Amid his discussion before the forum, the mayor underlined a handful of issues not handled adequately in the mind of the Venezuelan public :

Although López carries many ambitions and insights, unless significant pressure is leveraged on Chávez in the coming months from fellow American states or domestic fervor, its seems unlikely he, nor the rest of the near 400 blacklisted candidates, will have the opportunity to lay their hand to the table. Nonetheless, the mayor’s visit has seemingly stirred the pot in Caracas, as the regime ponders the prospects of an microscope of the eroding democratic trends of the Venezuelan state.

Update: Upon his return to Caracas this past week, the mayor was subsequently detained at the airport for two hours and purportedly roughed up physically by unidentified officials. He described his treatment on Venezuelan television as unacceptable. His claims were later to be satirized across several programs.