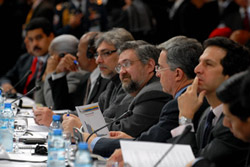 Not surprisingly, the bilateral defense agreement to extend terms of US presence in Colombia has ruffled the feathers of a few Latin American leaders at the Unasur conference in the mountain oasis of Bariloche, Argentina this week.

In reality, most everyone who follows this agreement, and the two countries’ historic defense cooperation, realizes this is merely a formalization of affairs. It’s no secret the US had a definitive role assisting Colombian officials in the hostage dupe against the FARC (Operation Jaque) last year, nor that they continue to provide intelligence, logistics, and training to its officials in means to undermine insurgent opposition and disrupt narco factions.

However, by no means have we seen a surge of in US troop/contractor levels, ceding of Colombian sovereignty, nor direct engagement that even remotely presents a bellicose shift toward neighboring American states. Any quips of this nature are fabrications of pure ‘Pixar’ scale. Now, whether or not this extended agreement is truly an effective defense measure for either country, alongside Plan Colombia, is another debate entirely.

Nonetheless, verbal crossfire ensued between the ALBA-aligned nations and president Álvaro Uribe of Colombia surrounding the sealed agreement. While Uribe outlined the case of mutual responsibility in such partnership and preached its concrete results that extend beyond verbal apathy, Venezuelan president Hugo Chávez and Ecuadorian president Rafael Correa emphasized the ulterior motives of US force projection and the destabilizing nature of such a move.

This is rather ironic considering that it was Correa’s mandate to scrub the lower-profile U.S. base in Manta that spurred this broadened initiative. And, in literal terms of regional destabilization, Chávez has a wrap sheet of saber rattling, ‘covert’ support for illicit factions, and arms acquisition from Russia and elsewhere that clearly trump any augmentative facet of this development.

Perhaps the most amusing exchange in this reunion came from Peruvian president Alan García, in lieu of Chávez’s insinuation that the US was preparing to invade Venezuela for its vast energy resources:

“Man, why are they going to dominate the petroleum if you already sell it all to the United States?” Mr. García said. The remark drew laughter, though not from Mr. Chávez.”

For a solid video recap of the summit, check out BBC Mundo (in Spanish), or its article review (in English).

Also, for more on the Chávez front, check out the polarizing profile by former U.S. Ambassador to Venezuela, Otto Reich, at ForeignPolicy.com.